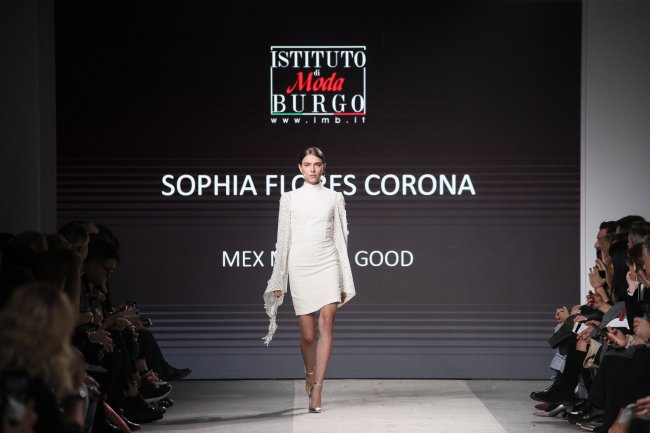 The second edition of Fashion Graduate Italia was staged from 26 to 29 October 2018 at Spazio Base in Via Bergognone in Milan. The event, dedicated to training in fashion and organized by the schools of Piattaforma Sistema Formativo Moda, offered a rich four-day program of catwalks, workshops and talks as well as meetings between students and the protagonists of the fashion industry.
The event, which saw more than 5,000 visitors attending this edition, also wanted to allow those who wish to work in the fashion world to learn about the quality and orientation offered by the main schools in Italy. Among the 10 institutes present on the catwalk of Fashion Graduate Italia, Istituto di Moda Burgo, also present with an informative and illustrative stand.
On Saturday 27 October some of the most talented students represented Istituto Di Moda Burgo, each one presenting a mini-collection. Visitors and experts were able to appreciate the creations made by: Carola Sangalli, Giovanni Caruso and Ilaria Boniforti, Grazia Ieva, Sophia Flores Corona, Matteo Barracu, Marina Lisyuk, Tamara Cartocci and Eleonora Martinis, Cecilia Lambardi Di San Miniato, Silvia Masci and Francesca Basilio .
The creations of the students of Istituto Di Moda Burgo have achieved great success among the public and industry insiders so much to be mentioned on important specialized publications such as Vogue and Artsthread but have also found space in Corriere Della Sera and on Rai 2.
0
Previous Article Next Article